Four months after the UAE was formed, several Christians started an evangelical church in Dubai. The initial membership was comprised of 6 or 8 families of gospel ministers and “oilers.” Originally founded as the Evangelical Christian Church of Dubai in 1972, the church changed its name to the United Christian Church of Dubai (UCCD) in 1992, and reverted again to ECCD in 2022.
These pioneering gospel ministers came to the Trucial States years before the UAE was founded as a nation. Leon Blosser arrived in 1964 to serve the Oasis Mission Hospital in Al Ain, later moving to Dubai. In those days, Leon had met 5 of the 7 sheikhs, and was on close personal terms with some of them. Fritz Dorsch, a German educated in tax law, had arrived in 1967 to start the maternity hospital in Fujairah for Christian outreach.
“Oilers” were engineers and construction workers building the production platform for the rig that drilled the first oil well. Reggie Hanberry, who arrived in 1968 from Mississippi, recalled, “When I first went to Dubai there was only a buoy floating out in the Persian Gulf to mark the spot to set the platform.” Sid Smith, from Louisiana, came out in 1972 with Conoco, “armed with a lot of prayer from our congregation,” along with 200 hymnals and a Lord’s Supper service. 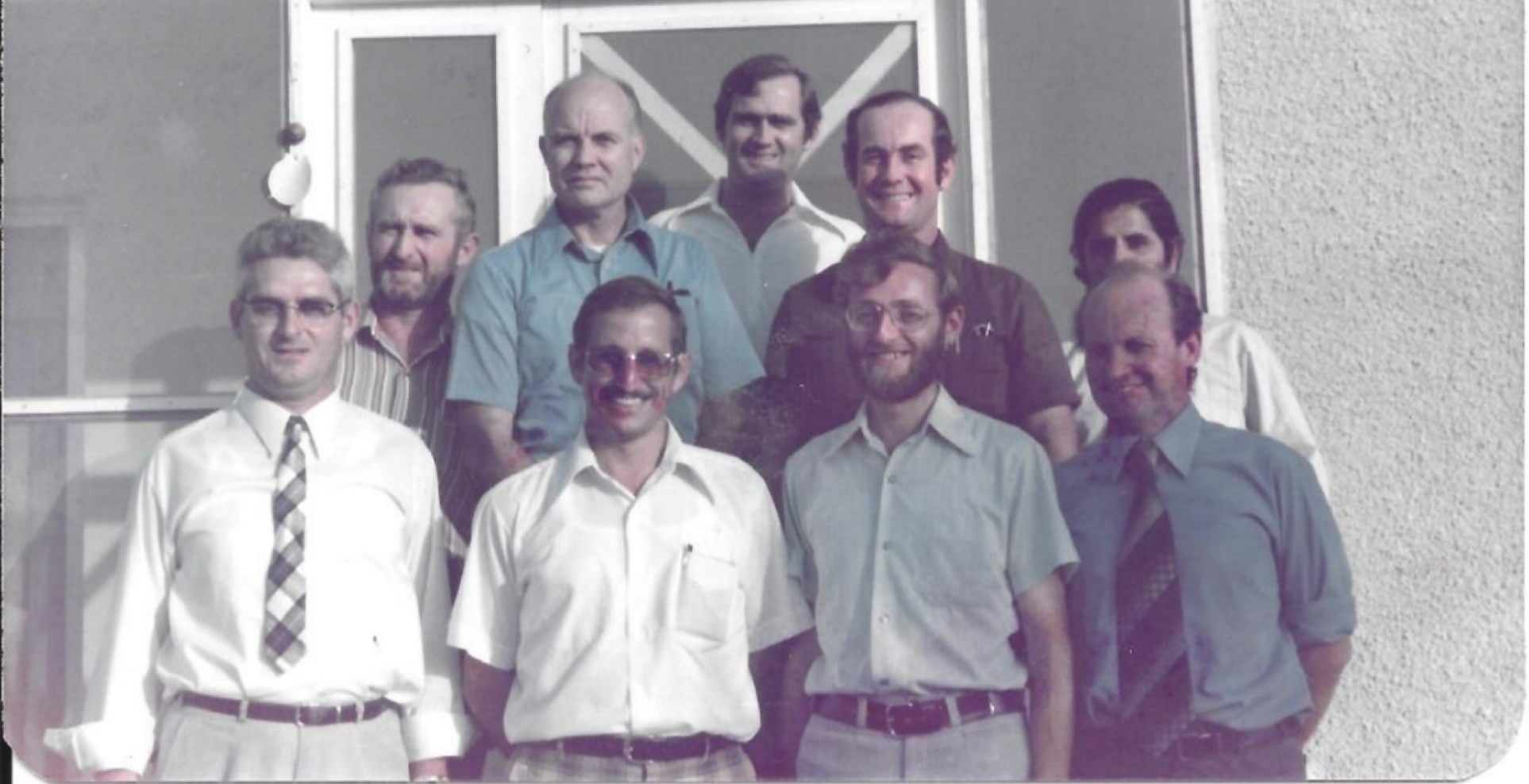 These leaders were explicitly committed to the Bible as the church’s authority. Leon Blosser recalled, “Our unity was in a common understanding of the gospel and a high view of the Scripture.”  Prior to adopting a statement of faith, the leaders devoted themselves to a year-long study of 1&2 Timothy, along with the 1689 Baptist Confession of Faith with C. H. Spurgeon’s introduction.
Beginning in May 1977 the church was led by an elected church council, with the proviso that “Men who may be offshore will have their wives to serve in their absence.” Women like Carol Campbell and Margaret Blosser were involved in children’s ministry, hospitality and loving evangelistic outreach, the forerunners of many women who ably served the church.
Initially they met in the newly-built Holy Trinity Anglican church building. This was before the days of air conditioning. As one early leader recalled, “Sometimes we had to decide whether to sit inside and suffocate or sit outside and sweat!” 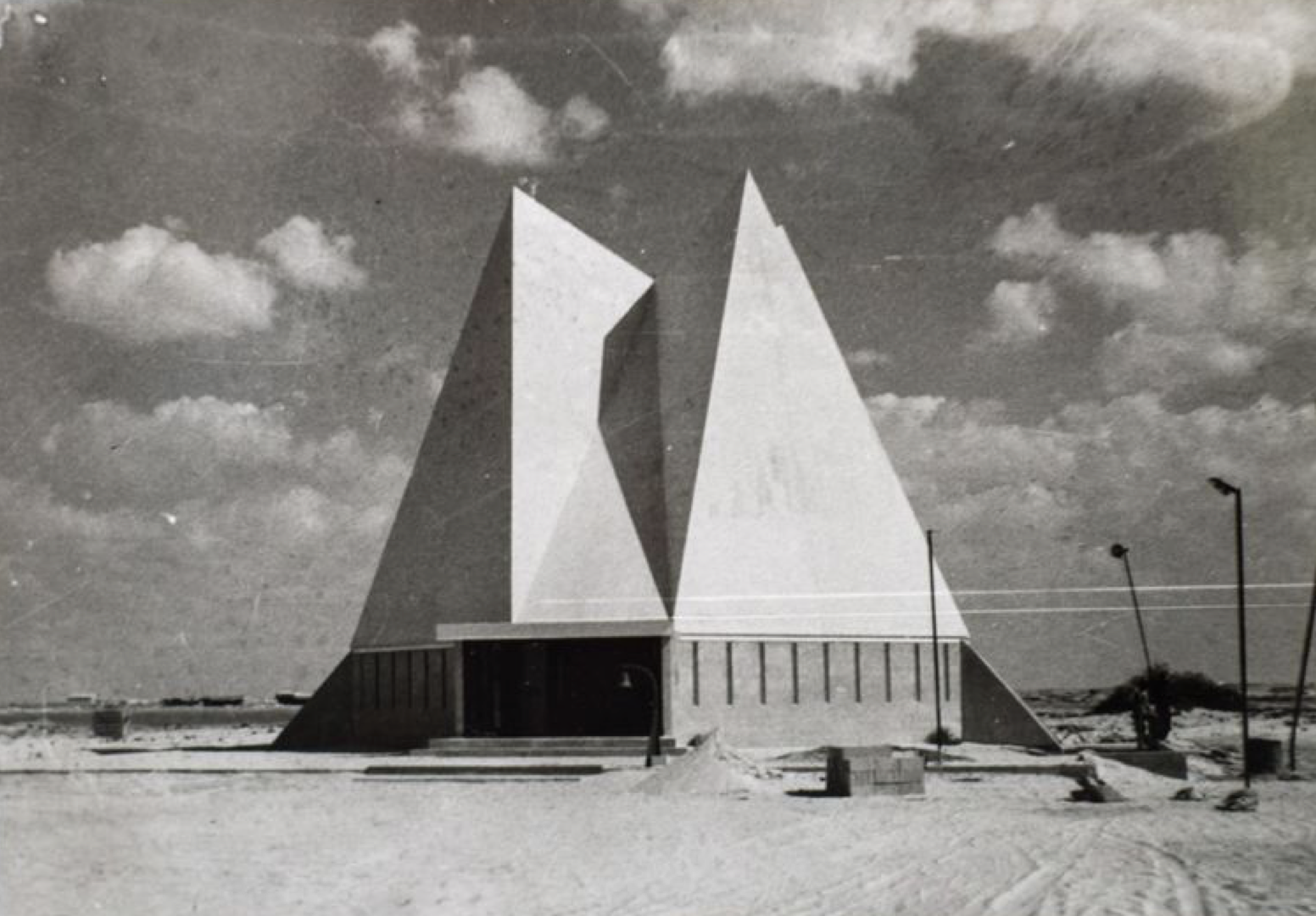 In 1974, in order to meet on the Lord’s Day instead of Friday, the church moved to the Dubai Petroleum American School gymnasium. Following rising international tensions which forced the church to meet elsewhere, in 1990 the church found a suitable Arab-style villa owned by Sheikha Miriam, the sister of the Dubai Ruler Sheikh Rashid. When notified about the church’s tenancy, the Sheikha reportedly said, “I praise Allah because my place is being used to worship him.” Across the street from the Iranian consulate, the “Jumeriah villa” provided a stable meeting place which led to a season of numerical growth as the economy continued to grow. Other congregations began meeting there, including the Arabic Evangelical Church of Dubai. 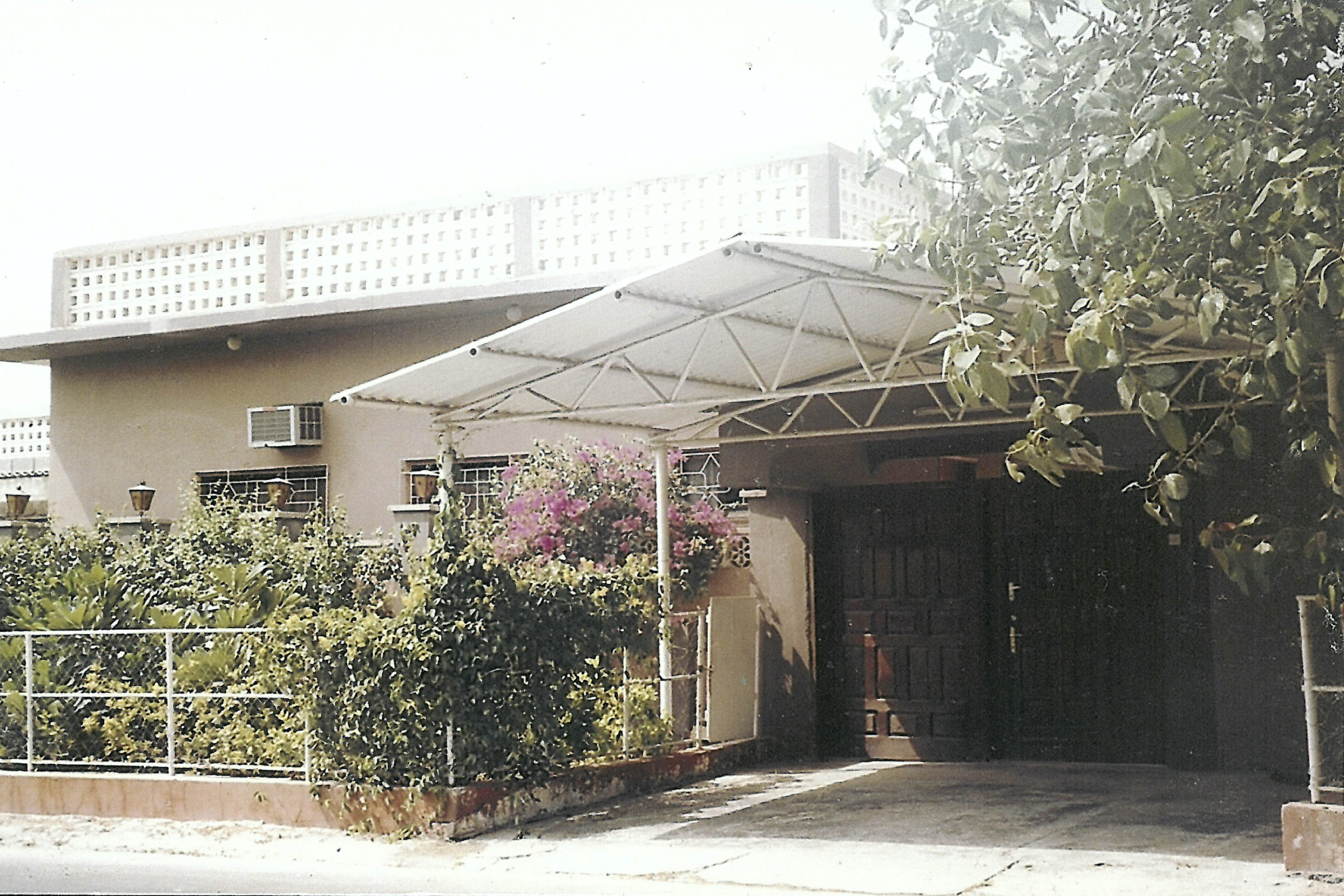 During the 1980s the church embraced a more revivalistic approach, including invitation hymns and altar calls. This season was marked by disunity, leading to the forced departure of two different pastors and a bitter church split in 1992. Thereafter, the church drifted toward pragmatism. As one pastor search committee chairman admitted, UCCD in the 1990’s was characterized by “minimal doctrine.”  Sadly, UCCD became more known for being international than being evangelical.

Despite the church’s internal struggles during this season, God blessed the church with a joint land grant to UCCD and AECD by decree of Sheikh Hamdan bin Rashid Al Maktoum on October 28, 1997. The church gave generously and sacrificially to construct the Dubai Evangelical Church Center, which opened its doors for worship on October 24, 2003. 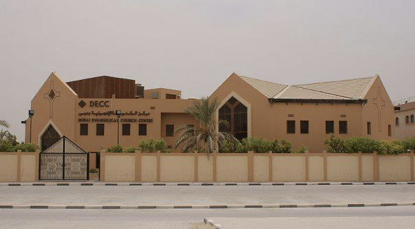 REVITALIZATION
During the following years, UCCD became committed to positioning the Bible at the center of all its ministry, seen most explicitly through a return to expositional preaching. The church added scripture readings to the weekly gathering, a regular prayer of confession, theologically rich hymns and songs (old and new), and a monthly corporate prayer meeting. The corporate worship became more biblically saturated, and the congregation grew spiritually as well as numerically.
In 2005 we began emphasizing meaningful church membership. This affirms that following Jesus is a community project in which the community is defined and accountable. In 2009 the congregation adopted a church covenant to clarify what it should look like for members to love one another as Jesus commanded us. The structural changes took root in the life of the congregation as the church grew in its love and commitment to God and one another.
Over time the whole community became more gospel-centered: in our conversations before and after church, the counseling, the home groups, the discipling occurring throughout the week.  A growing proportion of our church began reading good books of solid theology and application. The Bible Society, managed and led by UCCD church members, grew into a valuable ministry resource spreading good books of sound doctrine and life application. Annual Bible conferences exposed our members to outstanding teachers and ministry networks, solidifying the theological direction of the church. We worked and prayed to become an entire community centered on the gospel of God’s grace. 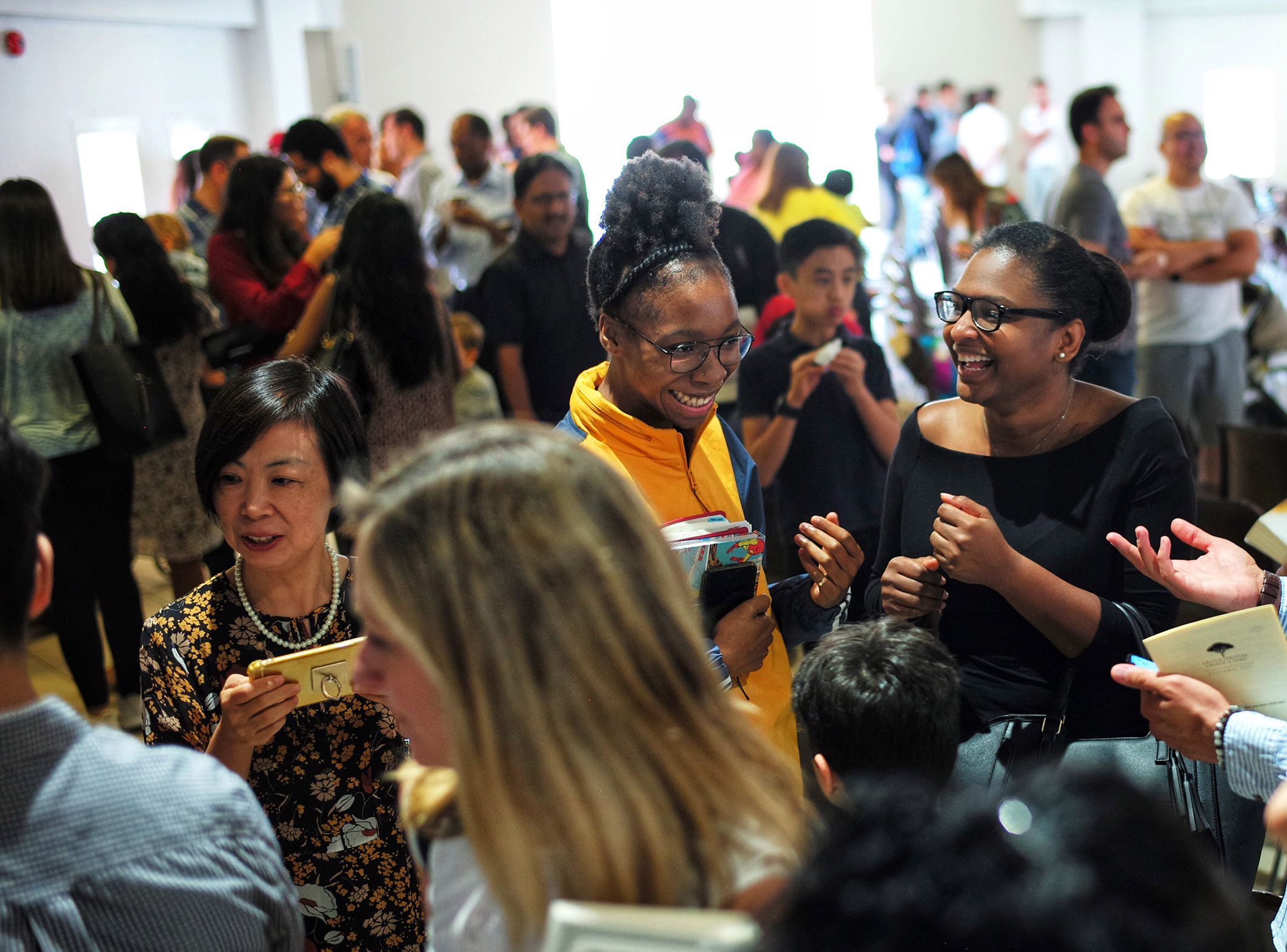 During our history, many faithful men had shepherded the flock, but from 2008 onward there was a growing sense of unity among the leaders, both in terms of theology and ministry philosophy. The addition of more godly elders cleared the way for an acceleration of church reform. These elders were diverse in ethnicity and cultural background, but united in a shared understanding of the gospel and ministry priority. 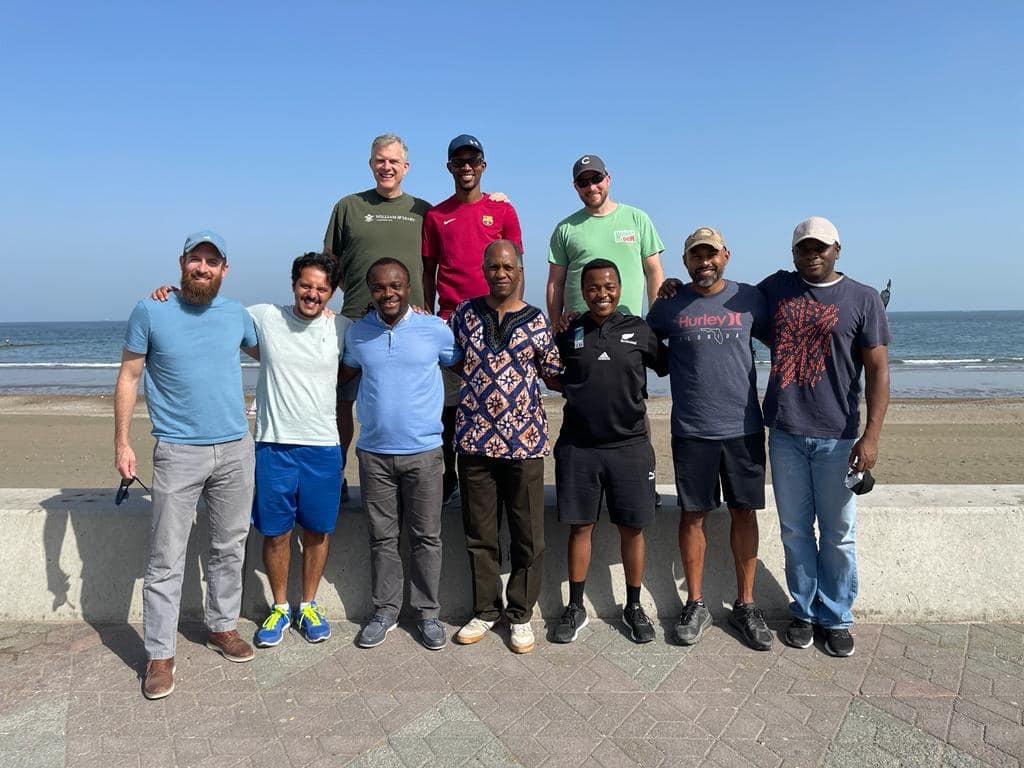 MISSIONS AND CHURCH PLANTING
From the beginning, our church was motivated to be an evangelistic light among the local Arab people. A 1978 church newsletter said, “We ought to have a special function, that being primarily the spreading of the gospel to our hosts.” As UCCD’s leaders became unified around a gospel-centered, word-oriented ministry philosophy, we concluded that “missions” on the Arabian Peninsula included, among other things, pastoral training and especially church planting in our region. We knew that it was God’s intent that “through the church the manifold wisdom of God might now be made known to the rulers and authorities in the heavenly places” (Eph 3:10). And through the multiplying of healthy congregations, the nations would be reached with the gospel message.
As early as 2007, we were praying for opportunities to plant additional churches, looking for property to buy, and seeking government authorization to establish new churches. In 2010 we told our members, “Rather than one mega-church, we long to see multiple gospel-centered churches in neighborhoods throughout the city.  This is the best way to reach the nations with the gospel.  And that’s our ultimate goal.” In the coming years we planted three new congregations in the UAE:

Church planting was costly: New leaders had to be cultivated, and many rose to the challenge. Some ministries suffered, but others were strengthened. For example, most of our musicians went with our church plants. Our musical accompaniment became more stripped down and mere. But as a consequence, our congregational singing became more robust. Around this time, one non-Christian from Spain commented on how heartily we sang. He recalled that it made the hairs on his arms stand up on end, saying, “I didn’t believe what they were singing, but they sure did!” Not long after that he was converted and baptized. Our joy in the Lord became more and more evident. Over time, gospel influence multiplied.
In 2009, guided by the belief that it is the church that produces pastors, we began our pastoral internship program to train ministry candidates from this part of the world. Our goal was to give a biblical model for doing ministry as these men became exposed to the inner workings of our church—first, by observing a biblical approach to ministry; second, by studying biblical teaching on the church, systematic and biblical theology, pastoral leadership, and spiritual formation, along with practical training in preaching and teaching; third, by engaging with the church’s individuals, families and home groups.

By God’s grace, most of them today are pastoring or otherwise supporting ministries back in their home countries. Our whole church enthusiastically embraced this opportunity to build up future leaders. Every year, they got to know the interns, invited them into their homes, and prayed for them faithfully. The internship expanded our horizons and stretched us all into becoming “world Christians,” which was crucial for our spiritual growth.

GOSPEL PARTNERSHIP
Between 2009 and 2022, the UAE experienced extraordinary growth in gospel influence through the reform and planting of congregations motivated to be salt and light among all people. Alongside UCCD’s church planting efforts, churches in Abu Dhabi, Al Ain, Fujairah and Ras Al Khaima were being revitalized and starting new churches. The pastors of these congregations supported one another through fellowship and prayer. We partnered together for preaching training and Bible conferences. We cooperated in church planting, preaching supply, and evangelism. What unified us was a high view of the Scriptures, a commitment to God’s sovereignty in salvation, biblical eldership, believer’s baptism, and congregational self-government.

In 1972, Jebel Ali (“mountain of Ali”) was a rocket-firing range for the British Royal Air Force. Now it is the place where our church meets every Sunday. After 50 years, UCCD remains committed to the same ministry philosophy with which it was founded: evangelical faith, scriptural worship and sound doctrine. Through many struggles and trials, God has been faithful. In his kindness, for 50 years UCCD has maintained confidence in the power of God’s inerrant word, and we never wavered in our commitment to reaching the lost. We continue to long and pray that the gospel may “speed ahead and be honored” among all the peoples of the UAE, especially our beloved hosts, the Emirati people.